Tour guides take you where the ghouls are
By Gretchen McKay, Pittsburgh Post-Gazette

Many people like to scare themselves silly with a good ghost story this time of year, and the Pittsburgh region is happy to comply.

Whether it's the quintessential Halloween tale of footsteps creaking across a deserted attic, or a woman weeping in an empty dressing room, or a headstone that keeps toppling over even after the grave has been moved -- it's pretty easy to make the hairs stand up on the back of your neck.

"It's a natural inclination. People are fascinated with what they can't explain," says Sean Collier, one of four guides who leads ghost tours through several Pittsburgh neighborhoods with Haunted Pittsburgh.  It's not just about trying to explain what often can't be explained. These eerie stories often  connect us to the past. Ghost tours -- at least those in the 'Burgh -- also are a great way to (re)learn some of the city's history.

One name you hear over and over again during Haunted Pittsburgh's Oakland tour is Schenley, the surname of one of Pittsburgh's major philanthropists. The industrialist Henry Clay Frick also plays a starring role in many of the tales told during the company's 90-minute walking tours, along with Mrs. Soffel, Harry Thaw, Roberto Clemente and Andrew Carnegie.

Haunted Pittsburgh didn't officially open its doors for business until 2008, but its owners have been collecting stories for much longer, said Mr. Collier, who grew up in Ross, studied theater at Penn State and now lives in Edgewood. The Oakland and Pittsburgh tours are offered weekends from April through the end of October, and there's also a haunted pub crawl (ages 21 and over) along Carson Street on the South Side on Saturday ($20, not including "spirits"). You can make reservations online at http://www.hauntedpittsburghtours.com/ . . . .

The most popular event, thanks in part to its twinkling nighttime views of the city skyline, is the Pittsburgh tour ($16), which starts at the Grand Concourse at Station Square and includes a ride on the Monongahela Incline to the top of Mount Washington.

But for the neighborhood that Pittsburghers have long considered the city's most haunted, you have to look north. On the North Side, ghosts of Confederate soldiers are said to roam the halls of the National Aviary on Arch Street, which was built on the site of an old Civil War prison.

Local legend holds that a house in Allegheny West was the site of several gruesome murders. The wife of the first owner of a house at 1129 Ridge Ave. was so enraged at finding her maid in bed with her husband, the story goes, that she beheaded her after stabbing her beloved to death. The next owner was textbook psychotic, murdering six women inside and then experimenting with their severed heads. If ever a space should be haunted, that would be it.

Oakland ($15) should be at the top of the haunted list, insists Mr. Collier, who is associate editor of Pittsburgh Magazine and also critiques films for the 'DVE morning show (he's seen leading a Mount Washington tour on a new episode of the Web series "Jim Krenn Raw").

"If you want to find a lot of ghost stories, paradoxically you have to go to where there is a lot of life passing through," he explains.

He's not just talking about all those college students. Long before the University of Pittsburgh relocated there in 1908, Oakland was a "destination" with a lively arts scene, restaurants, cultural events and a grand Beaux-Arts style "skyscraper" hotel (now the school's student union) that drew rich industrialists, celebrities and sports figures.

"And when you have so many people coming in, over time some bad things happen."

Suicide is a reoccurring theme in Pittsburgh's supernatural world. We hear of the actress who killed herself in the Pittsburgh Playhouse on the day of her wedding and now is seen walking in her white dress back and forth across the Hamlet Street Theater balcony. And of the wife and mistress who committed suicide on the top floor of Bruce Hall (one jumped to her death and the other hanged herself). Their ghosts supposedly move objects and occasionally send the elevator straight to the 12th floor.

Later, as the group pauses in front of the English Classroom, located in a deserted, dimly lit corner of the Cathedral of Learning, Mr. Collier tells the story of how Mary Schenley still hangs out in the lavish Greek Revival ballroom that was dismantled and rebuilt in the Cathedral after her death. Apparently, she likes to rearrange the furniture at night and make the chandelier swing.

The 90-minute tour winds up in front of the Frick Fine Arts building with a short history lesson on the industrialist's attempted assassination in 1892 -- Frick was for a short while known as the most hated man in America. By this time, we're better acquainted with many of the Pittsburgh area's better-known urban legends: the Mothman of Mount Pleasant, W.Va. (scenes from the movie were filmed on campus), Kecksburg (site of a UFO incident in 1965), Stephen Foster's cousin John Rower (whose tombstone caretakers can't keep in place) and the trio of ghosts who haunt the Carnegie Library.

This being 2011, we've also been treated to a few first-hand accounts of modern encounters with the spirit world, such as the one about a ghost on Mount Washington who took pictures of a woman with her own cell phone while she slept and an even wilder yarn about a haunted toaster.

Why a ghost would steal a piece of bread is beyond me. Then again, who's to say it's not possible?

"Our policy is, if someone says it's true," says Mr. Collier, "we believe them." 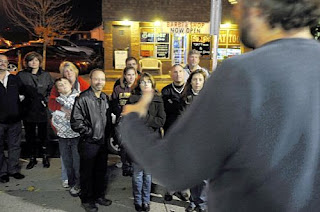