AN EVENING WITH
PITTSBURGH'S SCARE MASTERS 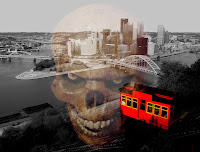 Come and see--and meet--a stellar line-up of the titans of all-things-scary in Western Pennsylvania. A spooky symposium featuring:

●Bob and Charlie Cramner ("The Demon of Brownsville Road")--the most celebrated tale of the supernatural in our region's history. The Cramners fought against an evil entity . . . and won!
●Scott Simmons (Creative/Marketing Director and co-owner of Scarehouse). Scarehouse is Pittsburgh's nationally acclaimed Halloween attraction and a Western Pennsylvania treasure. Scott will talk about what goes into creating the Scarehouse.
●Thomas White (Pittsburgh's acclaimed folklore and ghost historian). Tom teaches history and folklore of Pennsylvania at Duquesne University and is the author of a host of great books exploring our region's folklore and the unexplained.
●Kathleen Mullavey (Haunted Pittsburgh ghost guide). Pittsburgh's first lady of chills shares some of Pittsburgh's greatest ghost stories. A limited amount of items will be available for purchase. Come early to meet the speakers. (Doors open at 6:00 p.m. Event starts at 7:00 p.m.)

HAUNT PITTSBURGH: The curators of Pittsburgh's nightmares, the archivists of its fears, and the trustees of all things that go "bump in the night" in Western Pennsylvania.

"This isn’t a tacky tourist trap or a collection of generic urban legends. This walking tour dives deep into Pittsburgh history to unearth forgotten tales . . . all featuring a good scare or two. Prepare to learn a few juicy Steel City secrets." (Pittsburgh Magazine)

PRICE: Price: $18 per adult, $10 for kids 12 and under. All ordering is done on-line. We pay Pittsburgh's amusement tax.

PARKING: For parking options, go here. (In addition, there is a large public parking lot directly across the street from the City-County Building.)

PITTSBURGH has a South Side and a North Side--we take you to its dark side. Our downtown outdoor walking tour takes you as close as possible to the old Burgh's most haunted spots. At Haunted Pittsburgh, we happen to think the truth is far more interesting--not to mention scarier--than anything we could possibly make up.

So if you are looking for underpaid actors with fake English accents donning ghoul costumes and telling stories that are obviously made up, THIS ISN'T THE TOUR FOR YOU. If you get a thrill when zombie-wannabes, bathed in strobe lights and caked in grotesque make-up, jump out and grab you, THIS ISN'T THE TOUR FOR YOU. If you are pining to see door knockers transform into the face of Jacob Marley, THIS ISN'T THE TOUR FOR YOU. But if you like to hear about Western Pennsylvania's creepy history--stories that will raise the hair on the back of your neck and leave you feeling a tad uneasy before you shut out the lights at night--this is the tour for you. This is the real deal: we tell good old-fashioned ghost stories--creepy stories, stories that are "meticulously researched, brilliantly crafted, and beautifully told" (post-gazette.com).